If you’re composting at scale, at some point, you’ll need a reliable compost shredder that’ll cut all your garden waste for you, including the dry twigs and large branches. It’s easier than using a lot of different garden tools, and it’s definitely better than having to deal with a manual compost shredder. At least your arms won’t hate you.

In a previous post we looked at the best compost shredders in the USA as part of our compost tools series. Unfortunately, many of those are not available in the UK (and vice versa!) So in this post we’ve put together a round up of the best UK compost shredders, as well as a buying guide to help find the device which meets your needs.

These compost shredders have been picked for durability, efficiency, and reliability. Regardless of which one you choose, you can guarantee you’re getting a machine you can depend on. We also included various budgets to match all tastes. 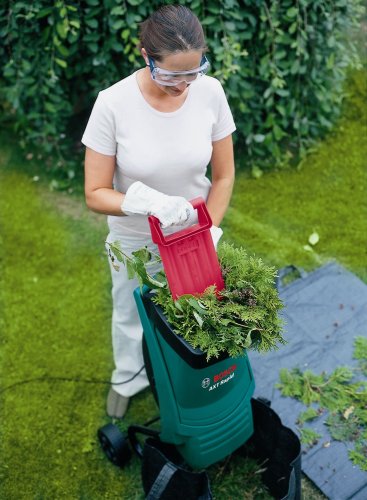 The Bosch AXT 2200 shredder is hard to beat. Judging by the amount of Amazon reviews the machine has, we’d say the users love it as much as we do!

The AXT can cut a wide variety of garden waste, including big branches. It may also be the best compost shredder for leaves. It has a 40mm blade that shreds the branches efficiently into 1mm compost chips. The blade spins fast to avoid any blockages, and it can run for up to hours continuously without a hitch.

Additionally, the blade is reversible. That way, you can have it up and running again even if it gets blunt.

The Bosch is lightweight; its weight stands at 12 kg, making it easy to lift it and move it around to store it. On top of that, it comes with two back wheels for easier transportation.

Bear in mind that the Bosch is a loud shredder, though. It has a sound level of 103–105dB, which is substantially higher than the safe levels. It’s not recommended to stay exposed to that sound for a long time, especially as it gets louder when shredding wood, so we recommend using with ear protection. You’ll also need to make sure your neighbours are okay with the sound.

The only other downside to this Bosch shredder is the short blade life. Users reported that it gets blunt faster than it should. However, that’ll only happen if you frequently throw dry twigs and large branches into the shredder. With regular garden waste, it should stay sharp. 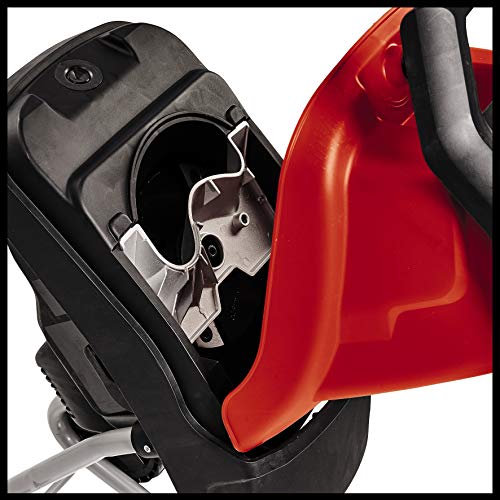 The Einhell electric compost shredder looks strikingly similar to the Bosch AXT 2200, but comes in a vibrant red colour and is a lot more affordable. It comes with two durable steel blades that’ll work for ages before showing any signs of rust. The blades are reversible, so you can turn them around to have a new cutting edge whenever they go blunt.

The Einhell features a wide funnel opening that makes feeding the shredder a piece of cake. You won’t make a mess around the machine with all the garden material. What’s more, the funnel also comes with a safety interlock, and can be detached for cleaning.

The Einhell’s motor runs on 2500W power, which is quite decent for the affordable price. It also has overload protection to keep it from burning.

Like the previous options in our list, the Einhell comes with a pair of wheels to help you transport it without a hitch. It’s also worth noting that the Einhell is lighter than its counterparts. It only weighs 9.8 kg; you’ll be able to lift it single-handedly if you’re used to heavyweights. 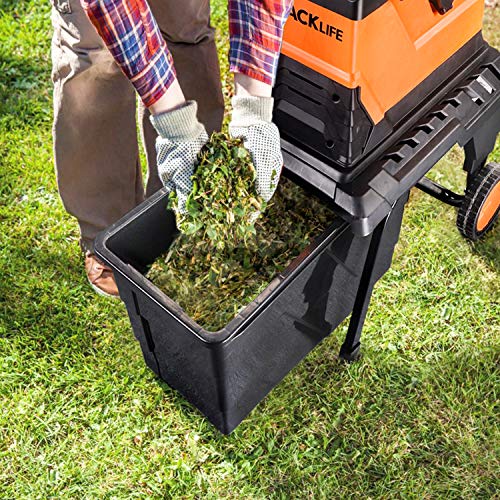 The Tacklife electric shredder has it all: the trendy design, the high efficiency, and the moderate price. The shredder can cut branches with diameters up to 45mm. In other words, it’s capable of cutting bamboo, bark, and shrubs in addition to soft mulch and other garden waste.

The Tacklife sports eight blades that are reversible and resistant to blockage. Powered by the 2800W motor, the blades cut through the waste quickly and with precision. There’s also an overload protection button to make sure the engine doesn’t shut down and prevent the machine from burning.

The shredder’s collection box has a 55L capacity. You’ll be able to use the machine for hours before having to empty it.

The Tacklife is relatively quiet. At a maximum level of 90dB, it’s a lot better than the Bosch 600853670. Even then, it only reaches that level when cutting through stiff branches. Otherwise, it won’t bother you or your neighbours.

The trendy orange build of the electric shredder is made of durable polypropylene. It’s resistant to impact, scratch-resistant, and highly stable. It also has two large wheels for easier portability. 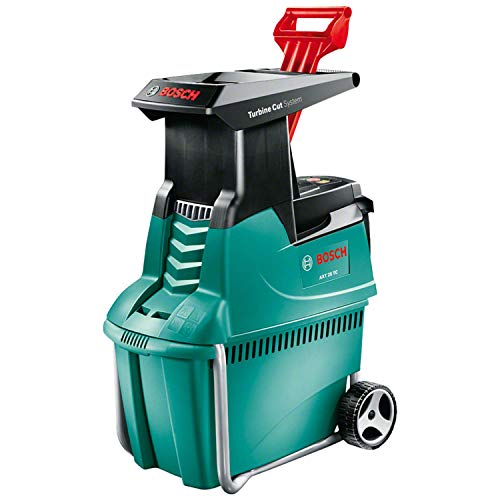 If your garden waste has a bit of everything, including leaves, twigs, and large branches, the AXT 25 compost shredder grinder may be the one for you. It’s the first Bosch shredder that’s capable of cutting both soft and hard garden waste and is powered by a robust 2500W motor.

The Bosch can cut diameters up to 45mm, thanks to its torque of 650Nm. It comes with a block release system that solves any blockage instantly without shutting down or needing to remove the hopper.

The collection box has two handles to make it easier for you to move it for emptying. Its capacity is a respectable 53 litres, although ideally we’d prefer a larger capacity given it high price.

The Bosch’s detachable hopper fits perfectly into the collection box, making storage a breeze. You’ll be able to keep it stored anywhere.

There’s only one downside to the Bosch: a much higher price than the other options. However, bear in mind that we’re talking about a high-end, durable machine that’ll work relentlessly for ages.

This device will get rid of all your garden waste for you, even the hard branches that are challenging to deal with. It also comes with its share of advanced features that are well worth the high price. 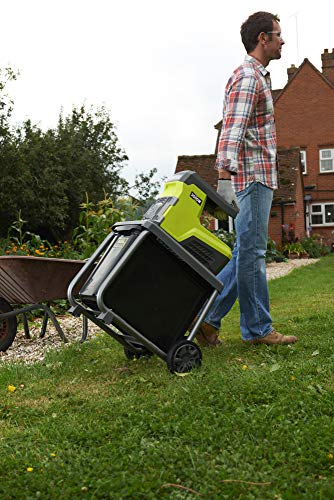 With a 3000W motor power, the Ryobi shredder is rightfully the most powerful shredder on our list. With its reversible steel blades, it cuts through all your garden waste like it’s nothing, including twigs and wood branches.

The Ryobi isn’t silent by any means. In fact, no impact shredder is silent. The ones labelled so may be quieter than their competitors, but they still emit some noise. In the Ryobi’s case, it has a sound level of 93dB, which is well into the non-safe zone.

The RSH3045U operates on a gear and drum mechanism. The rotation cuts through all the leaves and waste, turning at a high speed of 55rpm. That’s quicker than most impact shredders on the market. The machine can also cut diameters up to 45mm.

If you’re not used to shredders, this one is very easy to use. All you have to do is plug it in, press the start button, and voila!

You won’t have to worry about blockages with the Ryobi. It has a reverse moving mechanism that solves any jam. What’s more, the high diameter capacity means jams won’t occur frequently.

You probably see the terms ‘impact shredders’ and ‘roller shredders’ a lot. Most users only know impact shredders are much noisier than their roller counterparts, but they’re not aware of the major differences. Here’s a quick comparison between the two.

Impact shredders are the best option for shredding leaves and green material. They’re noisier than most shredder types, and they mostly have a spinning blade mechanism. Additionally, they’re less prone to blockages than roller shredders—mainly because they only cut green waste.

Impact shredders’ blades wear out quickly because of the soft materials, so make sure your shredder has more than one blade. That way, you’ll have to replace them less often.

Finally, impact shredders are usually lighter than roller ones, and they cost less.

Roller shredders work for all kinds of waste—soft green mulch and tough wood branches. They have a rolling mechanism that cuts the material finely. They’re the better option for large amounts of waste, and they mostly have self-feeding systems.

Roller shredders are likely to get blocked due to wood pieces that get stuck and the delicate rolling blades.

These shredders cost more than impact shredders, so only get them if you intend to shred a lot of garden waste.

Paying money for the compost shredder is the easiest step. It’s what’s before it that’s hard. Choosing the most suitable machine for your needs isn’t easy; you’ll need to consider all the essential features to avoid ending up with the wrong machine.

Here’s a roundup of the vital features you should consider.

No one likes to deal with a complex device; that’s why a lot of users aren’t fans of manual shredders. Having to pull a compost shredder hand crank can be hard work too.

The easiest shredders to deal with are electric ones. They mainly operate by a click of a button. Shredders with blade or rotor disc systems will come with a push stick for feeding, so that’s one more step you’ll have to do.

We advise opting for the simpler option. For example, the Ryobi RSH3045U only requires a button click to start.

If the hopper is ill-designed, you’ll find yourself creating a mess every time you try to feed it. The most convenient hoppers are funnel-shaped because they make feeding much easier. Side hoppers are better than top ones because they’re more accessible.

There are two reasons you should consider the noise level before buying. Firstly, your neighbours may complain if the sound gets too loud. Secondly, getting exposed to a high sound for an extended time isn’t healthy.

Noise levels normally range from 85–105dB. Electric shredders are the least noisy on the market, but some of them are still too loud. Anything higher than 90dB is considered higher than the safe levels. When operating your shredder, it’s better to always wear ear protection.

Will you need to move the shredder around a lot? If your answer is yes, aim for a lightweight shredder, like the Einhell. However, bear in mind that heavier shredders are usually more powerful. If you don’t want to sacrifice the power, you can get a shredder with wheels for easy transportation.

Do you have enough space in your shed or garage to store the shredder? If not, then you’ll need to get a compact one. You can opt for a foldable model or a model that facilitates storage. For instance, the Bosch Axt 25 packs into the collection box, so you only have to free space for it.

Our top pick for compost shredders is the Bosch Axt 2200. Compared to similar models, it has a reasonable price. It’s also full of advantages, such as the light weight, the transportation wheels, the compact dimensions, and the high efficiency.

All things considered the Bosch is quite the bargain, especially considering that it’s able to cut wood branches along with the green waste.