You want to create your own compost. But you’re either limited on green/brown space, or don’t have any. So can you compost on concrete?

Fortunately, the answers yes. There are, however, some limitations, but don’t worry – we tell you how to get round them,

To make compost, you need microorganisms. There are huge numbers of these – over a billion in every gram of compost. These make their way up from the soil into your compost, speeding up the compost process. Unfortunately, if you compost on concrete, these microorganisms will not naturally be available (at least, not in the same huge quantities). 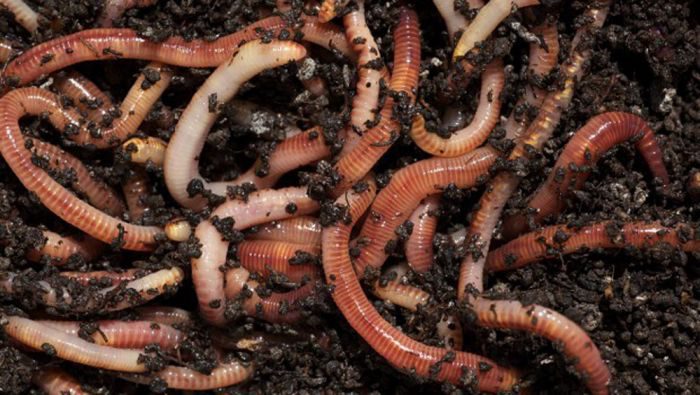 It’s not just microorganisms that are present in the soil. Soil, at least good soil, contains huge quantities of worms. In fact, in an acre of soil you could expect to find 1,000,000 worms (source:  Cornell.edu) (although, of course, the number will vary hugely and not all will be exactly the right type for your compost.)

Worms are often credited with finishing off the the compost process, which they certainly do, turning them the organic material into your compost heap into highly nutritious (for plants!) worm castings (vermicast) but I’ve often found them thriving at a fairly early stage in a warm or cold compost heap.

Not just any worms, mind you. The big, often fat ones you find when you turn the soil are earth worms. The worms you want are compost worms. A popular compost worm, although not the only one, is the ‘red wriggler” or “tiger worm.

If you start your compost on concrete, it may take a little longer for those worms to find their way into your compost heap.

Some compost systems are simply messy. The worst are unstructured heaps, which are a pain to keep neat and tidy and tend to leak strands around the compost heap. Compost heaps can also leak a dark, discoloured liquid which could stain the concrete. So if tidiness and clean concrete is important for you, it’s important to choose the right system.

How to compost on concrete: Overcoming those limitations

First, there are plenty of systems that compost without being sited on earth. I’ve even composted in a tiny home waste bin, on concrete, with a bit of cheating, so you shouldn’t have a problem. So none of what follows is essential – but it will help improve things.

Add soil into your compost

First, you can easily introduce soil into a compost bin. One way would be to create a layer of soil at the bottom, or you could mix soil into the compost itself. In general I’d avoid adding too much soil, because at the end of the day you’re trying to rot down stuff to create houmous to add to soil, but adding a few handfuls should help speed the process up.

This will introduce the essential elements you need to get your compost going; bacteria, fungi and actinomycetes. These microorganisms multiply fast, so you won’t need much.

Soil can also be helpful if you have lots of green material. I find it can be particularly helpful with grass. Grass is super high in nitrogen, so if you’re not careful you’ll find it getting too hot, too quickly. I’ve turned compost heaps before now too find a layer of ash where grass had been. So if you are short on other ‘browns’ (high carbon sources such as shredded paper, shredded leaves or straw) adding soil to grass or other high ‘greens’ (high nitrogen sources such as grass) can help balance the heap as well as introduce microorganisms.

Add old compost into your compost

Another nifty tip is to add a little bit of compost from an old heap into your new heap. Obviously, you’ll need an old heap to do this, or a nice neighbour/allotment pal to get a handful from, but if you do have access to this, you’ll have plenty of compost bacteria ready and waiting to get munching on your new pile.

Hopefully, if you’re adding soil you’re also adding worm casting. If your compost bins gets hot, then worm castings will probably get killed. But most smaller bins don’t get super hot, so there’s a good chance you won’t need to worry about it. If it does get hot, you can always add some more soil to introduce those worms again.

If you’re like me, and are too impatient to wait for the worms to hatch or find their way into your heap, you could simply collect the worms and add them to their heap to start working their wormy magic. Or, if you prefer, you can order some worms to put in your compost heap.

Finally, it’s worth remembering that worms have a way of finding a way into every compost bin, even it if’s located on concrete away from earth. So even if you don’t add worms or soil, as long as you have the tiniest opening in your compost system, those amazing worms will find their way in eventually. All you are doing by adding worms is speeding up the process.

Top tip: Putting a layer of newspaper at the bottom can help encourage worms to settle into your compost heap.

What type of worms should you add to your compost?

If you do add any worms, you’re likely to get the best results from adding compost worms rather than the fatter and slower earthworms. Eisenia fetida, more commonly known as redworm, the red wriggler or the tiger worm, love munching on the decaying material you are likely to find in your young compost heap.

Is a handful enough? Yes, if you’re patient, and that’s because they multiply fast (although not as fast as bacteria). 10 red wrigglers will lay around 35 cocoons over 10 days, which will hatch which hatch after around 23 days. Each cocoon produces 2-3 worms which themselves will be ready to produce after between 40 to 60 days. (Source: Venter et al, 1988). Temperature does affect the activity of worms, so expect slower activity in the winter. And also do remember, if you are hot composting, wait for the compost to cool down before adding more worms!

You could also build a raised bed on your concrete, fill it with soil and place your compost bin on it. This settles the compost bin on earth, and means the leachate (the liquid that runs out of the compost) will enrich the soil around the bin.

You can easily buy raised beds, or can make your own with some planks of woods or sleepers. For a small raised bed, you can simply take a palette and knock out the centre (I paint these as well, so that the wood will last longer). However, if you do this on concrete, it’s well worth lining the bottom with plastic to ensure that the compost doesn’t leak into the ground.

Compost systems for composting on concrete

While I personally like compost bins that open on to the ground, for a compost bin located on concrete you’ll probably want a closed system to avoid mess. (That’s assuming you don’t go down the raised bed route.) Here’s a few ideas for closed systems which would be suitable on compost.

One option could be to build a brick compost heap. On the positive side, these should offer plenty of insulation to keep your compost warm, and I think they look quite attractive. On the negative side, there will be less oxygen to access your heap (unless you turn it regularly, in which case that won’t matter, it’s quite a lot of work and can’t easily be moved/removed at a later date).

These are completely closed off. On the con side, they do require regular turning, and for best results you should remove it from the tumbler and put aside for finishing off.

Another completely closed system, this can produce compost extremely quickly.

The Dalek Compost Bin a plastic bin with a port to open out to get the compost out (which generally sounds easier than it is) this might be an option for you. You will still get a mess when you take out the compost, but it’s hard to avoid mess completely.

Image of worms via Primrose.